According to a recently released report by the UN Office on Drugs and Crime, acreage dedicated to opium production in Afghanistan has reached an all time high. Every year the UN releases these reports, and they are a testament to the massive failure of global drug prohibition. While poppies grow almost anywhere, the illicit market is largely supplied from three areas: Afghanistan, Southeast Asia (mostly Myanmar) and Latin America (mostly Mexico and Colombia). Of these three, Afghanistan is by far the largest supplier, accounting for 85-90% of worldwide production. 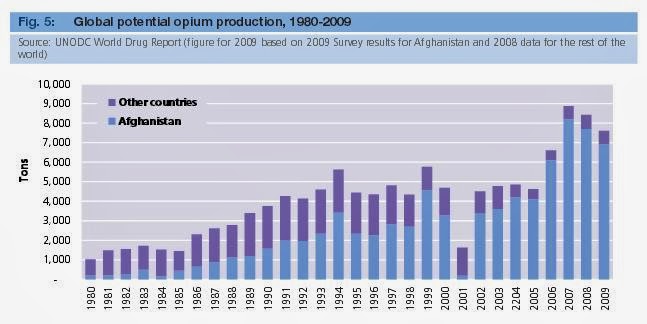 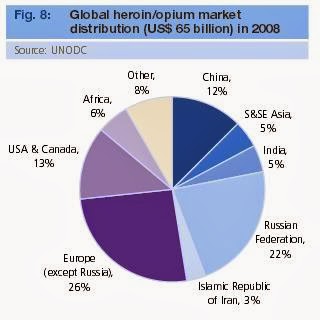 Opiates are popular worldwide, unfortunately the majority of consumers use the semi-synthetic derivative heroin instead of opium. There are still opium users and even markets, but worldwide the market for heroin (an estimated $55 billion) dwarfs the market for opium (an estimated $7-10 billion). Worldwide illicit consumption of opium is estimated to be around 5,000 tons annually, most of which is ultimately consumed as heroin.


The price of opium varies depending on the season and region. The price of opium is naturally reflective of supply and demand, it is lowest during times of harvest, and in regions that grow a lot of poppies. In 2013 the price per kg varied between $100-200, averaging around $150. Crop eradication has had a negligible impact. In 2010 bad weather in Afghanistan adversely affected crop productivity, causing a spike in prices toward the end of 2010. Ironically the increase in opium price enticed more farmers to grow poppies, contributing to the increase in acreage dedicated to opium production. 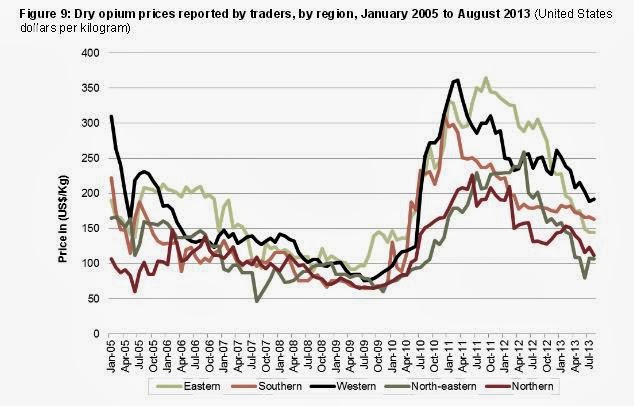 The price of opium is artificially high, yet still relatively cheap compared to the price of heroin on the streets of the United States. In a previous review of an Afghan heroin production yields of heroin from opium were reported to be 6%. Other sources indicate 10% is more usual, other papers report yields as high as 12-16%. The morphine content of the opium can vary and is probably the largest factor effecting the yield. According to the UN world drugs report, Afghan opium has a higher morphine content and requires 7kg of opium to produce 1 kg of heroin. At an average cost of $150 per kg, it costs a little over a thousand dollars worth of opium to produce a kg of heroin, or about a dollar a gram. Even using the more modest 6% yield, the final cost is only $2.50/gram.

Heroin obtains almost all of its value near the end of the distribution chain, after it is smuggled into the consumer country. Within the United States, I previously reported costs of $500/gram at the retail level. Brian Bennet, using data from the ONDCP, reports somewhat lower costs around $400/gram (with per pure gram costs as low as $150 for those buying weight of 10+ grams).


Afterword, why the trade in opium should be legalized:

Production of opium is driven by the worldwide demand for opiates. Trying to eradicate the drug supply is not only pointless due to the balloon effect, but it leads to unintended consequences that violate human rights. Farmers have a right to live a life of dignity, even if their crop is used to manufacture politically disfavored intoxicants. Moreover it is futile to destroy the crops, as even if the price of opium increases four- or five- fold, the cost to produce a gram of heroin would only increase to $5-10. This is why the cost of production has almost no effect on the street price. When heroin is selling for $400 per pure gram on the streets of US cities it doesn't matter if the cost of opium goes up or down.

The "Iron Law of Prohibition" states that prohibition results in forms of the drug that are more concentrated, which is why the vast majority of the world's illicit opium is ultimately consumed as heroin. While opium is usually eaten or smoked, heroin is often injected. The high cost of heroin also increases the utility of injection use, which combined with laws criminalizing injection equipment brings along other health harms like HIV and Hep C.

Instead of being able to order opium directly from the Afghan farmers over the internet, opiate users must purchase their drugs from black market suppliers who rely on criminal drug trafficking organizations to get the product to the markets. Opiates represent an illicit commodity worth an estimated $65 billion dollars, money which goes exclusively to criminal organizations.


The high cost of opiates in the black market causes many people dependent on illicit opiates to fall into abject poverty. When addicts are able to access opiates at reasonable prices, prices close to the real cost of production, many are able to live relatively normal lives. If heroin was sold at $10/gram, there would be no black market. Addicts would no longer commit crimes to raise money for their habits. The "junkie" stereotype is a product of our drug laws, after prohibition the popular image of an opiate user will hopefully be different.

There are other arguments for why opium should be legalized, but preventing Afghanistan from becoming a narco-state is a powerful one. The only way to do that is to bring the drug trade into the legitimate economy, by legalizing opium.

Just Say No (to Afghan Counternarcotic Efforts)
By Sam Kierstead

Documents from the UN Office on Drugs and Crime:

Posted by MorePheen at 4:06 PM