Drug selling and buying are considered consensual crimes.  Two people come to an agreement about quantity and price and make an exchange. There is no victim. A merchant who deals in tobacco or alcohol does not belong in a different logical category than a merchant of cocaine, cannabis or opiates. With alcohol or tobacco, after the purchase the responsibility to then use the substance lies with the purchaser, not the seller. If the individual chooses to use the drug in an irresponsible manner, such as operating machinery while intoxicated or otherwise putting others in harm's way, the consequences should lie with the individual. We don't hold liquor stores responsible for drunk drivers or cases of alcohol poisoning, neither should heroin sellers be responsible for overdoses resulting from use of their product.

Similarly the individual should educate themselves about the pharmacological effects of the drug prior to consumption. Just as one should not attempt to drive a car without first learning how to operate an automobile, one should not use drugs without first becoming familiar with their effects. Of course society has put in place regulations on the operating of automobiles, since they can be dangerous in the wrong hands. Unfortunately with illicit drugs it is a free-for-all. Far from drug control, the current system is completely uncontrolled. There are no age restrictions or any prerequisites at all in the illicit drug marketplace outside of cold hard cash. On the supply side there is no standards or quality control. The drug purchased may be something else entirely, or an inert substance. Substances oft injected are not sterile.

Accidental drug overdoses are often tragic, and probably largely avoidable if our drug policies were guided by science instead of hysteria. Nevertheless the drug war machine rolls on, and the bodies continue to stack up. As the crackdown on prescription opioids continues, heroin has been strong comeback, and with it an increase in overdoses.

The aggressive change in tactics comes as more people turn to heroin because of crackdowns on powerful prescription opiate painkillers that make them more expensive and inaccessible. The popular prescription drug OxyContin has also been reformulated to make it difficult to crush and snort, making it less desirable on the street, law enforcement officials said.

Nationwide, the number of people who said they have used heroin in the past year skyrocketed by 66 percent between 2007 and 2011, according to the Substance Abuse and Mental Health Services Administration. The number of people who died of overdoses and had heroin present in their system jumped 55 percent from 2000 to 2010, according to the Centers for Disease Control and Prevention.

Rather than going after lower-level users of heroin, prosecutors are looking to take out dealers and members of the supply chain by connecting them and the drugs they sold to overdose deaths and charging them with laws that carry stiff penalties.

Coronato and other New Jersey prosecutors are employing the state's little-used "strict liability for drug death" statute, a first-degree crime that holds dealers and producers responsible for a user's death and has a 20-year maximum sentence.

He and other prosecutors nationwide are changing the way they investigate overdoses, which were once looked upon as accidents. Detectives are being immediately dispatched when word of an overdose comes in. Paramedics are being told to treat overdoses like crimes. And coroners are being asked to order autopsies and preserve forensic evidence, as proving that a death was caused solely by heroin can be difficult when other opiates, drugs or alcohol are present in a person's system.

"When you go to an overdose death, treat it like a crime scene. Don't treat it like an accident," said Kerry Harvey, the U.S. attorney for eastern Kentucky. He has started prosecuting people who sold both prescription opiates and heroin under a federal law that prohibits the distribution of illicit substances and allows additional penalties for a death.

Technology is another boon to such cases. Prosecutors said cellphones have been instrumental in helping gather enough evidence because people leave behind a trail of text messages and calls.

"People text their dealer and say, 'Get me some horse,'" said Hennepin County, Minn., attorney Mike Freeman, using slang for heroin. "They text back and say, 'Meet me at McDonald's, I have some really good horse.' The guy is dead three hours later."

Some wonder whether the enforcement efforts are actually going to curtail drug sales. Douglas Husak, a lawyer and professor of philosophy at Rutgers University, said he doesn't think the stricter enforcement will stop people from dealing heroin.

"Heroin distributors are not murderers, and they're not murderers when their customers die from an overdose," said Husak, who has called for decriminalizing drugs.

In New Jersey, officials say heroin has become a scourge across the entire state, prompting Gov. Chris Christie to create a task force on heroin and other opiates. Forty-five percent of the primary drug treatment admissions in 2011 were for heroin, according to the White House Office of National Drug Control Policy.

"Did he stick the needle in my son's arm? No. Did he sell him stuff that was crazy? Yes," she said. "Should he be held partially responsible? Yes."


So let’s put aside the morality or logic of holding dealers responsible for overdoses, there are some very good reasons why this is a bad idea. For one it is doubtful that there will be any deterrent effect from the increase in penalties. The penalty for selling heroin or other opiates is already severe enough to deter most people who might enter the market if prohibition was repealed. There is a point of diminishing returns where additional penalties will have no further deterrent effect. Dealers do not operate on a daily basis expecting to be caught, nor do they expect their clientele to die from their product (it would be bad business to kill your repeat customers).
Many dealers are dealers in name only. Often they are addicts who support their habit in part by acquiring drugs for others, plus a modest fee. Such people are driven by forces more powerful than criminal law can hope to influence.

How much will the increased penalties cost taxpayers? An added 10 years to a sentence can run into the hundreds of thousands of dollars. As in all aspects of the drug war, this will undoubtedly fall heaviest on the poor and minority communities, exacerbating the already unconscionable racial bias in the US prison system.

Treating overdoses as crime scenes is likely to make the problem of fatal overdoses more likely. Since the increased penalties will have little to no deterrent effect, we can expect the frequency of overdoses to remain unchanged. However people will be less likely to call for help if they are aware that they will be criminally liable, especially if they sold the drugs themselves. This is where "Good Samaritan" laws come into play, where immunity is given in cases of overdoses. Specifics differ and some laws do not grant immunity for selling or for those on probation or in drug court.

What is more important, saving lives or punishing people for using opiates? History has taught us that we cannot do both. Short of a complete repeal of opiate prohibition, methadone, buprenorphine and heroin maintenance has a proven track record of saving lives, improving the health of addicts and the community in general. Naloxone access should be dramatically expanded to get OD kits in the hands of opiate users, and should also be available over-the-counter (OTC). If we are truly serious about ending the "epidemic" of opioid overdoses, this is the way forward (opiates are not infectious particles, this is a metaphorical epidemic).
Posted by MorePheen at 6:21 PM No comments:

Mario in Trouble With the Police 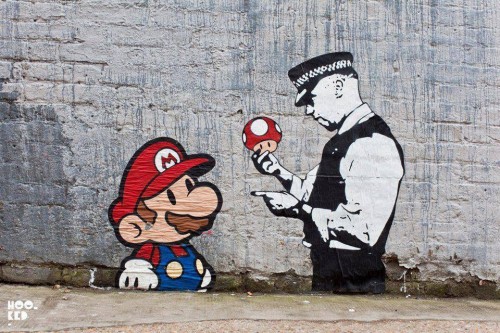