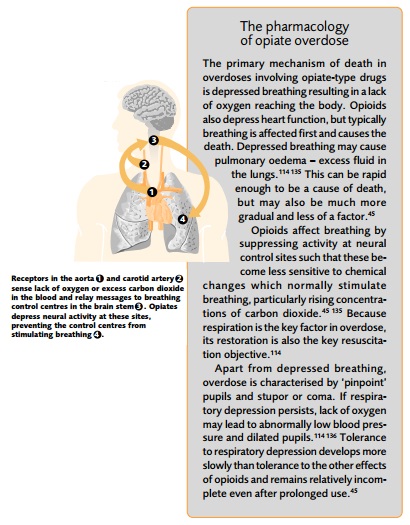 Most fatal overdoses attributed to heroin are not actually the result in taking too large a dose. Heroin overdoses are largely a myth.


What causes people to overdose on heroin? The conventional wisdom states that because heroin users do not know the purity of the drug they are consuming, they misjudge the strength of the dose. If only users knew the exact dosage, they wouldn't overdose.
This is largely a myth. The Consumers Union Report on Licit and Illicit Drugs exposed this myth back in 1972:


But alas, the two standard precautions against overdose--- warnings against taking too much and administration of an antidote--- are in fact wholly ineffective in the current crisis, for the thousands of deaths attributed to heroin overdose are not in fact due to heroin overdose at all. The evidence falls under three major rubrics.
(1) The deaths cannot be due to overdose.
(2) There has never been any evidence that they are due to overdose.
(3) There has long been a plethora of evidence demonstrating that they are not due to overdose.

Why these deaths cannot be due to overdose. The amount of morphine or heroin required to kill a human being who is not addicted to opiates remains in doubt but it is certainly many times the usual dose (10 milligrams) contained in a New York City bag. "There is little accurate information," Drs. A. J. Reynolds and Lowell. Randall report in Morphine and Allied Drugs (1967). "The figures that have been reported show wide variation." This ignorance no doubt stems from the rarity of morphine or heroin overdose deaths. The amounts of morphine or heroin needed to kill a nonaddict have been variously estimated at 120 milligrams (oral), 200 milligrams, 250 milligrams, and 350 milligrams - though it has also been noted that nonaddicts have survived much larger doses.

The best experimental evidence comes from Drs. Lawrence Kolb and A. G. Du Mez of the United States Public Health Service; in 1931 they demonstrated that it takes seven or eight milligrams of heroin per kilogram of body weight, injected directly into a vein, to kill unaddicted monkeys. On this basis, it would take 500 milligrams or more (50 New York City bags full, administered in a single injection) to kill an unaddicted human adult.
[...]
Dr. Helpern's associate, Deputy Chief Medical Examiner Baden, went on to further discredit the already implausible overdose theory at a joint meeting of two American Medical Association drug-dependency committees held in Palo Alto, California, in February 1969.
"The majority of deaths," Dr. Baden told the AMA physicians, "are due to an acute reaction to the intravenous injection of the heroin-quinine-sugar mixture. This type of death is often referred to as an 'overdose,' which is a misnomer. Death is not due to a pharmacological overdose in the vast majority of cases."

At the same AMA committee meeting and at a meeting of the Medical Society of the County of New York, Dr. Baden cited six separate lines of evidence overturning the "heroin overdose" theory.

First, when the packets of heroin found near the bodies of dead addicts are examined, they do not differ from ordinary packets. "No qualitative or quantitative differences" are found. This rules out the possibility that some incredibly stupid processor may have filled a bag with pure heroin instead of the usual adulterated mix.
Second, when the syringes used by addicts immediately before dying are examined, the mixture found in them does not contain more heroin than usual.
Third, when the urine of addicts allegedly dead of overdose is analyzed, there is no evidence of overdose.
Fourth, the tissues surrounding the site of the fatal injection show no signs of high heroin concentration.
Fifth, neophytes unaccustomed to heroin rather than addicts tolerant to opiates would be expected to be susceptible to death from overdose. But "almost all of those dying" of alleged overdose, Deputy Chief Medical Examiner Baden reported, "are long-term users."
Sixth, again according to Dr. Baden, "addicts often 'shoot' in a group, all using the same heroin supply, and rarely does more than one addict die at such a time."

So if heroin overdoses are not truly due to taking too much heroin, what is killing heroin users?

The depressant effect of opiates on breathing can be countered by conscious effort and opiates rarely result in a loss of consciousness. When combining opiates with CNS depressants, the drugs work synergistic ally to depress breathing, doses which may be well tolerated when taken alone can be fatal when combined. If an individual stops breathing in the presence of others an overdose can be avoided by waking the person up. Alcohol and benzodiazepines cause a loss of consciousness which preclude this possibility.

The combination of opiates and other CNS depressants account for at least half of all overdoses attributed to opiates, and in all probability are responsible for more than 50%. Educating people not to mix depressants with opiates would do more than any other preventative, educational campaign. It would certainly save more lives than just saying don't use heroin.

2. Deliberate Overdosing. Suicide is a major contributor to the overdose statistics.

Poor mental health and feelings of hopelessness are associated with overdose. Opiate addicts are far more likely to attempt suicide, four times as likely for men and eleven times as women. Overdose suicides are almost certainly under reported, so this rate may be much higher.
Unless the evidence for suicide is overwhelming most overdoses are considered accidental.  Establishing the number of suicide-overdoses is difficult.  One method involves asking persons who survived an overdose if it was intentional, then extrapolating this rate to those who died from an overdose.  Studies done in the UK indicate that up to a third of overdoses may have been intentional.  One of the few prospective studies followed British opiate and cocaine addicts notified by doctors.  The rate of confirmed suicides was 4 times higher than the general population for men and 11 times for women; 45% used an overdose of drugs as the method.  In British studies of persons on methadone deliberate, non-fatal overdose is twice as common as accidental.  A London study of opiate injectors not in treatment found that 1 in 10 overdoses is deliberate.  It is hard to determine the number of overdoses that are intentional, but it seems that somewhere around 10-30% are deliberate.

Addicts are more likely to OD when their tolerance is at its lowest. Users are most at risk for an overdose when they drop out (or are kicked from) an opioid maintenance program, after a period of forced abstinence  (usually due to incarceration), or after discharge from a detoxification hospital. This is more of a risk factor than a cause, but I included it in the list.

4. Homelessness and Street Use

An oft overlooked aspect of heroin use involves the mindset of the user and the environment where he/she is using. Opiate tolerance is not a purely physiological phenomenon, tolerance is also situation specific. Most regular opiate users have a ritual of preparation prior to ingesting the drug. Situation-specific tolerance is also a piece of the opiate overdose mystery:


The fatal consequence of the heroin injection may have been caused by the failure in the action of conditioned tolerance. As the figure shows, when a conditioned place preference arises, the user has to take a bigger dose each time to achieve the same effect as the user who does not have the opportunity for secondary conditioning with environmental stimuli since he or she constantly changes the place where the drug is taken [6]. When the drug is taken in a strange environment the conditioned tolerance does not operate since the organism is not "expecting" the drug. The end result is that the otherwise accustomed dose leads to an overdose and thereby to death. This is why the term "overdose" is misleading since the quantity taken was not greater than other doses taken without fatal complications
A case report: Pavlovian conditioning as a risk factor of heroin 'overdose' death. József Gerevich1, Erika Bácskai1, Lajos Farkas and Zoltán Danics. [Link]

Heroin concentration levels in a case A after conditioning in an accustomed place (A1) and in a new place (A2), and in a case B without conditioning.

Most "overdoses" involving opiates are chalked up to the use of opiate drugs regardless of the circumstances around the death (polydrug use, ect.)  This is well documented and known among those that care about the lives of users.  Unfortunately most people simply do not care about users and medical examiners readily attribute the cause of death to opiate drugs regardless of the toxicology.

Putting these factors together it becomes clear that drug prohibition itself contributes to overdoses among opiate users. Opiate prohibition causes inflated prices, users may add other drugs to augment the expensive opiates. Without prohibition, the cycle of addicts coming in and out of jails, prisons, detoxes and rehabs would come to an end. Each time an addict has their tolerance lowered they are at increased risk for an overdose.

The constant drug war propaganda in the media portrays opiate addicts, and especially heroin addicts, in an extremely negative light. Addicts are stereotyped as dangerous criminals, out of control and in need of rehabilitation. The uniformly negative view of addicts, combined with blatant stigma and discrimination (discrimination even written into the law), causes most addicts to hide their use. The situation today is not unlike how homosexuality was treated in the early 20th century. Today most addicts remain in the closet, for very good reasons. Being constantly reminded that one is both sick and a criminal (two charges also once leveled against homosexuals), takes its toll. The rate of suicide among homosexuals was also high during the peak periods of homophobia.

The artificially high cost of black market opiates causes many addicts to fall into abject poverty. Not only does homelessness make hygiene difficult, but it contributes to "street use" (use outside of one's usual place of consumption, such as a public bathroom). This contributes to a lowering of situation specific tolerance, further putting the user at risk of an overdose.

More on this topic to come.

The Consumers Union Report on Licit and Illicit Drugs by Edward M. Brecher and the Editors of Consumer Reports Magazine, 1972
Chapter 12. The "heroin overdose" mystery and other occupational hazards of addiction [Link]

Posted by MorePheen at 4:11 AM