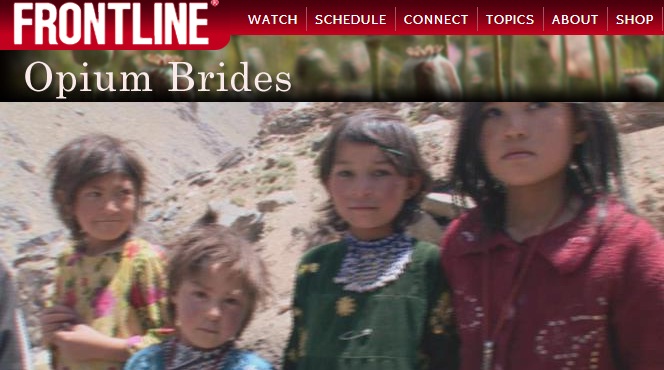 From investigating the sexual abuse of young boys to embedding with a group of insurgents allied with Al Qaeda, veteran Afghan reporter Najibullah Quraishi takes FRONTLINE cameras where few Western journalists can go.

Today Quraishi spoke with The World‘s Marco Werman about his latest journey — airing on FRONTLINE tonight — deep into remote Afghan countryside to investigate a horrifying sex trade: young girls kidnapped or traded to smugglers to meet the debts of impoverished opium farmers whose crops have been destroyed by the government.

Quraishi met several girls who were taken from their families, an existing problem that he says has increased as a result of poppy eradication programs. The girls “are only nine, 10, 11 [or] 12 and used for manufacturing heroin, or immediately married to traffickers or sold in other countries, like Iran.”

The smugglers are “very powerful and stronger than the Taliban and the government,” Quraishi tells Werman.

Listen to the interview below for more about what Quraishi sees as the prospects for helping the young girls, and tune in to Opium Brides tonight for the full story of how young girls, and even boys, are paying the price for counternarcotics policy in Afghanistan.

[Note: I have reproduced a few paragraphs from this article below, but I highly recommend reading the whole article to get a sense of the corruption in Afghanistan's government and drug trade. The article begins in the 1980's, with the Soviet destruction of Afghanistan's traditional crops]

In Afghanistan in the mid-80s, the Soviet Army ended up adopting a “scorched earth” policy [to systematically destroy agricultural resources]. That is because while the Soviets were able to control the cities, they were never able to control the countryside. The insurgency was always [launching] attacks from the rural areas on the cities and generating instability. The Soviets tried military operations in the countryside, which didn’t control the problem, so ultimately, they decided to destroy the agriculture in the countryside with the idea that this would drive the rural population into the cities, which they could control.

The effect was the complete collapse of the agricultural production of Afghanistan: the destruction of orchards, irrigation canals. The only thing the population could grow was opium poppy, which didn’t require [so much] irrigation, fertilizers or transportation, because Pakistani traders would come to the farm and pick up the opium. So this really unleashed the first systematic cultivation of opium poppy at the time.

Between 2001 and 2004, the U.S. very much had a hands-off policy towards the opium poppy, partially because Northern Alliance warlords, [whom the U.S. was] using for intelligence and for direct military operations against Al Qaeda and the Taliban, were knee-high in opium poppy. … So the U.S. said the priorities are to defeat the Taliban, not their human rights problems or that they are peddling in the drug trade.

The big change comes in 2009, when the Obama administration says, eradication is not doing what it promised. There is no decrease in corruption; in fact, there is a huge amount of corruption associated with eradication. It’s not bankrupting the Taliban; there is more poppy than there was a few years back, and it’s losing the hearts and minds of the population, and making counterinsurgency really difficult. So we are going to change policy.

The U.S. government decided to defund the centrally led eradication force, which was the main unit that was eradicating. But the Obama administration wanted to compromise somewhat, and they said if the Afghan government, local governors, wants to do some eradication, that’s their choice. If the local provincial governors decide the want to eradicate, we will provide them assistance, both equipment and technical assistance.

What often happens is that when the governors push ahead with eradication, they lose the support of the population; they do it at gunpoint, essentially.

To some extent, many governors engage in eradication, but it’s often extremely limited — maybe a few hundred to a thousand hectares eradicated, on the scale of having 15,000 to 60,000 hectares cultivated. But they feel they need to throw some bone to the internationals who are demanding eradication, so they take either actors who are very weak — the poorest farmers who have no capacity to intimidate the government or to corrupt the eradication teams — or they take opposition — rival politicians and their networks and their power base — and eradicate some elements of their poppy.

Afghan farmer beheaded with a PENKNIFE after refusing to let drug lords take his daughter and sell her as a sex slave, Daily Mail (UK) 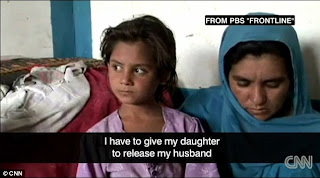 Opium gangs are taking the sons and daughters of Afghan farmers as collateral for unpaid debts.
A documentary exposes the fate of those who borrow from drug lords to set up cultivation of the heroin plant but are left destitute when NATO-backed forces destroy their crops.
The drug lords then take their children, including girls as young as ten, to Pakistan and Iran to sell them into the sex trade or use them as drug mules.

I have reproduced two comments posted in response to the Daily Mail article. Like many sites, comments can be voted either up or down, The rating reflects how many positive and negative responses the comment received, positive numbers reflect more "likes" and negative numbers "dislikes."


"To anyone who does illegal drugs: I know you won't care, but this is what your money is buying. You are paying for all this murder, suffering and misery to be done in you[r] name. It's just as well for you that you have no soul, otherwise you wouldn't be able to live with yourself."
- Steve, Gateshead, 29/1/2013 11:30
Rating: +566

"This is why heroin MUST be legalized. Heroin has a large profitability because it is illegal, if you legalize it and tax it then the price will crash and these ruthless assassins won't gain anything from the stuff. WHEN WILL YOU LEARN????????"
- Getreal, Corby, 29/1/2013 11:03
Rating: -75

Clearly among the Daily Mail readers there is a lot of support for blaming heroin users for the mess in Afghanistan, and very little support for legalizing heroin. Also, illegal drug users apparently have no soul.

On the surface there is very little reason why using heroin should be considered morally wrong. Heroin is produced from opium, itself dead plant matter. Therefore using heroin is the moral equivalent of eating lettuce. The belief that using mind altering chemicals is morally wrong is a religious belief, no one who uses legal drugs (tobacco, alcohol, caffeinated beverages) ought feel morally superior to illicit drug users. Even those who completely abstain (Mormans, "Straight Edgers") from mind altering chemicals[1] should not consider themselves morally superior. Jesus was a drug user.

There may indeed be a moral argument for abstaining from heroin use, given the situation around its production. If purchasing heroin does contribute to terrorists' funding and the slavery of fellow human beings, especially children, a case against heroin consumption can be made even if heroin use is morally neutral.

Are there other products out there, for which there is a demand that fuels human rights violations and civil unrest. I can think of an obvious analogy: oil (keeping in mind the word analogy means a comparison of similar features, there are obvious differences too). The developed world's "addiction" to oil certainly funds many regimes which then use the money to oppress their people. Oil money funded the Libyan dictator Col. Muammar el-Qaddafi.

From Liberia to South Africa to the island of Madagascar, Libya’s holdings are like a giant venture capital fund, geared to make friends and win influence in the poorest region in the world. This may help explain how Colonel Qaddafi has been able to summon sub-Saharan African soldiers to fight for him in his time of need — Libyans have spoken of “African mercenaries” killing protesters and helping him rout rebel fighters — and why so many African leaders have been so slow to criticize him, even as his forces slaughter his own people.

So lets insert gasoline in place for drugs in that Daily Mail comment:

"To anyone who buys gasoline: I know you won't care, but this is what your money is buying. You are paying for all this murder, suffering and misery to be done in you[r] name. It's just as well for you that you have no soul, otherwise you wouldn't be able to live with yourself."

The parallels now become obvious. People need oil to live their lives, our entire economy is based on oil, without it our economy would grind to a halt. We will, and have, gone to war over oil (does anyone believe Iraq was all about WMDs anymore?). Nobody wants their gas money to fund dictators who use it to commit human rights violations, but they don't have a lot of choices. Similarly heroin users would prefer to buy "free trade" heroin, but have to take what they can get. Much like oil, consumers do not need heroin (that is they will not die without heroin), but there is a large demand because heroin makes life better. As to why heroin users use heroin, that will be a subject for another day, but suffice to say many users need heroin in their lives  in the same way many citizens need gasoline and petroleum products.

I have no sensible suggestions on how to solve the world's oil "addiction". Unlike the "addiction" to oil, the world's "addiction" to opiates is eminently solvable. The answer is to legalize and regulate the trade in opium. Allowing the heroin users in the destination countries to purchase opium and opium products (morphine, heroin, ect) directly from the farmers in the producer countries would completely end the drug-related corruption in Afghanistan. Opium legalization will not solve all of Afghanistan's problems, but we are currently funding both sides of the conflict. Drug users fund the crops and traffickers while governments fund (completely corrupt and counter-productive) eradication efforts. After years of this, and unbelievable "collateral damage" (eg "Opium Brides") caused by our war on opium, there is no end in sight. It is well past time for a new approach.


[1] What exactly is a mind altering chemical, or drug, will be the focus of a future post. The distinction between food and drug is mostly cultural/sociological, we call some substances people consume drugs and others food.


Further Reading:
The Opium Brides of Afghanistan, Newsweek
What You Should Know About Women's Rights in Afghanistan, Huffington Post

Posted by MorePheen at 6:03 PM