Heroin in the United States: Where does it come from, how much does it cost and how pure is it?

I recently read an interesting paper on the US heroin market. Ever wondered where does the heroin in the US come from, how pure it is or how much it costs? This paper answers those questions. I summarize the salient points in this post. The paper with a link to the pdf can be found here:

The Entry of Colombian Heroin into the US Market: The Relationship between Competition, Price, and Purity. Daniel Rosenblum , Jay Unick†, Daniel Ciccarone‡ April 8, 2013 [Link]


Where Does it Come From? 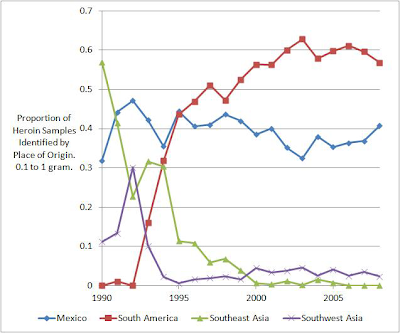 In the US heroin is largely supplied from two source countries, Mexico and Colombia. Colombian heroin made its way onto the US market in the early 1990's, and has since dominated the east coast. The introduction of Colombian heroin also coincided with a significant drop in price.
How Pure is it? 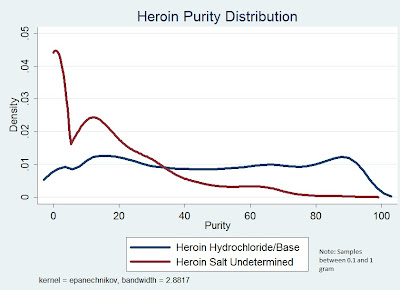 Heroin is usually found as a hydrochloride salt or free base (HCL/B - 82% samples), a grey or white powder sometimes called "china white". Occasionally it comes in other forms such as "black tar", in this paper these samples were labeled salt undetermined (HSU - 16% samples). Purity estimates are for retail amounts from 0.1 to 1.0 grams. Generally the HSU heroin is less pure with the majority of samples below 40% pure. Though more pure on average than HSU heroin, HCL/B heroin has a very evenly distributed purity. Samples range from high to low purity, I guess it depends on where you buy.

How much does it cost? 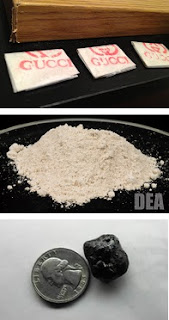 Heroin is sold either as individual doses, usually in $10 "bags", or by weight. When sold by weight retail amounts are in fractions of a gram, 1/2 grams, 1/4 grams and 1/10th of a gram (a "point"). Visit a blog devoted to dope bags here. Pictured are several "bags" of heroin, which is an individual dose packaged in wax paper stamped with a logo. The stamp name often comes from popular culture and allows dealers to develop a brand. Also pictured is HCL/B powder, and HSU "black tar" heroin. 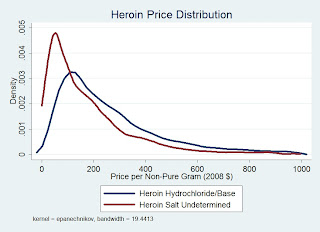 As expected there is some variation in the price of a non-pure gram of heroin. However from the distribution we can see that most heroin costs less than $200 per non-pure gram, and the vast majority below $400. HCL heroin is more expensive, which is consistent with its higher quality. 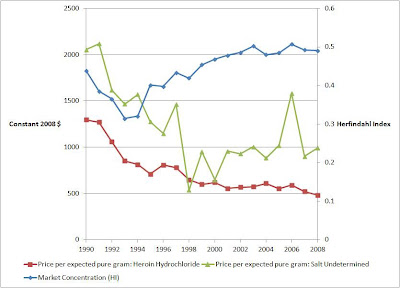 The price of heroin has been steadily declining since the 1990's. Nationally the price per pure gram for HCL/ B heroin (the most common type) is about $500. There is significant variation regionally as the final graph demonstrates. It is safe to say that most users are paying about 50 cents per milligram for heavily adulterated diacetylmorphine.
Heroin Price by Region 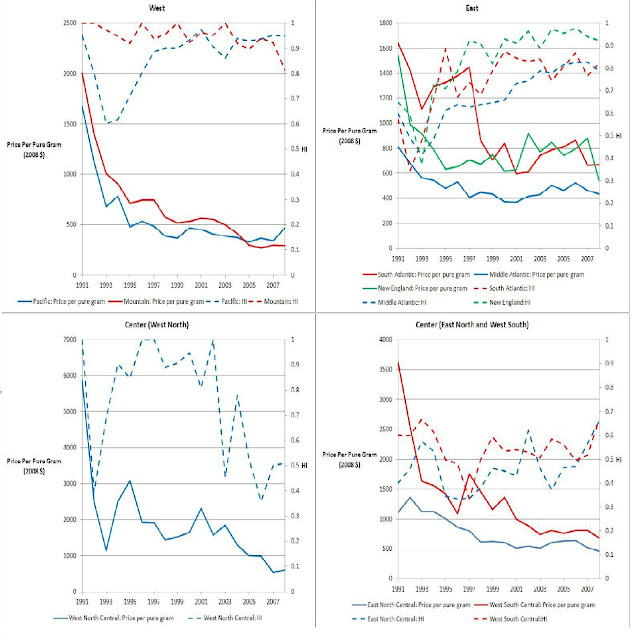 Price Inflation Due to Prohibition

The following two tables list the cost of opium necessary to produce a gram of heroin. The price varies, but at most the opium costs $6 and may be as cheap as 11 cents. By the time that gram of opium is converted into heroin, smuggled into the destination country, repackaged and sold in retail units the cost jumps to over $800 (paper from 2003 so may not reflect the price drop discussed above)! For the sake of argument, let us assume the price of opium needed for a gram of heroin is $3. Now let's also say the price doubles at each step in the distribution, so the heroin produced now costs $6 per gram. Transit to consumer countries raises the price to $12 per gram, and finally after repackaging and retail distribution the cost to the user is $24 per gram. As I noted above the national average cost of heroin is $500 per gram. Based on this estimate prohibition raises the price by a factor of nearly 21, in other words heroin is 21 times as expensive as it would be if not illegal.

The other way we can observe the effect of prohibition on heroin prices is by looking at the cost of legal morphine. Heroin is easily made from morphine, while this step might slightly raise the cost, heroin also weighs more so I doubt this would dramatically increase the cost. Mallinkrodt sells morphine at a per gram cost of $10.61 per gram, in a legal marketplace heroin should sell for a similar amount ($0.01061/milligram). Therefore we can estimate than prohibition inflates the price of heroin by a factor of 50 (ie under legalization heroin would be 50 times cheaper or about $10 per pure gram).

THE EFFECT OF DRUG PROHIBITION ON DRUG PRICES: EVIDENCE FROM THE MARKETS FOR COCAINE AND HEROIN Jeffrey A. Miron. 2003 [Link]