How Heroin is Made 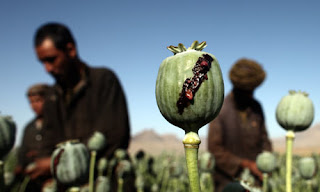 This review of a heroin manufacturing process uses images from Afghanistan, though opium poppies grow all over the world and the process of making heroin destined for the black market is the same.  It all starts here with the harvesting of opium from the poppy.  The pods are lightly scored with a blade and the raw opium collected.  The opium is collected into balls and transferred to a makeshift "laboratory" where the morphine will then be extracted and processed into heroin. 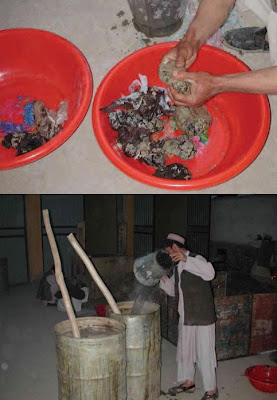 Upon arrival at the site the opium is unpacked and placed into tubs.  It is then crushed and divided into portions for each batch.  The crushed opium was then placed into barrels and hot (not boiling) water is added.  At this point the pH is around 8.  The barrel is then stirred and any solids that float to the surface, pieces of plastic or plant matter, are removed.  Hot water with lime (Calcium Oxide, CaO) is added until all the opium has dissolved and the pH reaches 10-12.  The barrels are then filled with water, covered and left to sit overnight.  The following day the insoluble oils and resins will be floating on the surface, the opium solution containing the morphine is then siphoned out into separate containers. 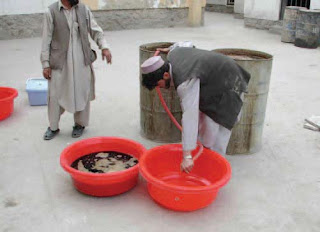 The dark brown opium solution which contains the morphine is siphoned off from the insoluble oils and residues in the opium.  The solution may then be filtered again through cloth or sacks to further remove insoluble particles.  The filtrate (liquid portion) is then poured back into a barrel. 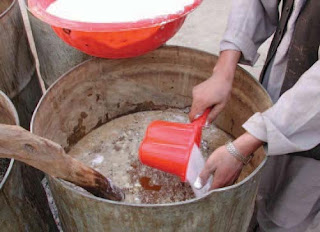 At this point the morphine is ready to be precipitated (solid morphine comes out of the liquid)  by the addition of Ammonium Chloride (NH4Cl) while stirring continuously.  After all the ammonium chloride is added, the barrel is covered and left to stand overnight.

The crude morphine base is placed in an aluminum pot and a slight excess of acetic anhydride is added to the pot.  The pot is stirred until all the morphine has dissolved and then left for 45 minutes.  A fire is built during this time and after the 45 minutes have passed the pot is heated for 30 minutes. 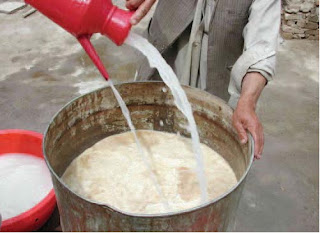 The reaction mixture is then poured into a bowl with warm water and the solution is filtered again into another barrel.  A solution of sodium bicarbonate (baking soda) is poured into the barrel, carbon dioxide gas is given off as the base reacts with the acid.[1]  When the solution no longer gives off gas and the pH reaches 10 the crude heroin base will be precipitated out of the solution. 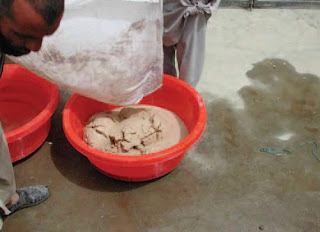 The solution is then filtered again through a cloth.  The brownish colored crude heroin is then poured into a bowl to be prepared for the final purification step. 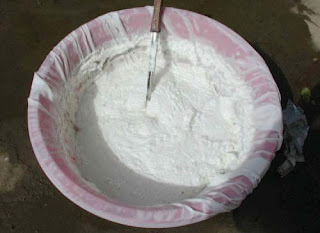 The brown heroin base is then dissolved in dilute hydrochloric acid until the pH reaches 7-8.  Activated carbon is added to the solution and left to sit for 30 minutes.  The solution is then filtered again through a cloth, and a second time through a filter paper.  After the impurities are removed, the heroin base is precipitated out by addition of a dilute ammonia solution until the pH reaches 12.  The solution is filtered again, leaving a relatively pure, white heroin base. 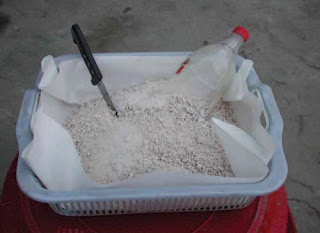 The final step involves dissolving the heroin base in a hydrochloric acid and acetone solution. The solution is filtered through a filter paper into a metal bowl.  The liquid is evaporated leaving off-white heroin hydrochloride.  This final product is about 75% pure, see Table 4 below.  The yield of heroin from raw opium, is about 6% by weight.

The process of making heroin from opium is a simple one and can be done anywhere in the world.  The following two tables list the needed equipment and chemicals needed for the process.  Calling these laboratories is generous, and truly an insult to real chemical labs.  For these reasons it should be obvious that there will never be a victory in the war against heroin by attempting to stop the supply at its source.  Opium poppies grow all over the world and the chemical reaction requires only the most primitive equipment.  Electricity and running water is not even needed.  The only chemical that would be difficult in any way to procure is the acetic anhydride.

The intensified effort to block the Taliban's access to acetic anhydride comes as the Afghan war turns deadlier, with a record 236 U.S. and allied troops killed so far this year, according to icasualties.org, a Web site that tracks coalition fatalities. U.S. Army General John Craddock, supreme allied commander for Europe, is pushing to increase military involvement in countering the narcotics trade.

The chemical allows Afghanistan's drug lords to dramatically increase revenue by producing heroin in their own laboratories instead of shipping out raw opium to be processed elsewhere. According to Craddock, a kilo of opium fetches about $100, compared with $3,500 for heroin.

This article is from 2008, so apparently that "rare" victory was short-lived.  Given the 6% yield of heroin from opium, it would take 16.7 kg of opium to produce 1 kg of heroin.  Using the figures provided by Craddock, to produce a kilogram of heroin requires $1,670 worth of opium to produce a product worth $3,500, more than doubling the value.  Additionally the final product is only 6% the weight, making it easier to smuggle to destination countries.  Compared to the logistics of smuggling thousands of tons of opium out of the country to be processed elsewhere, it is far easier to smuggle the acetic anhydride into the country than opium out. 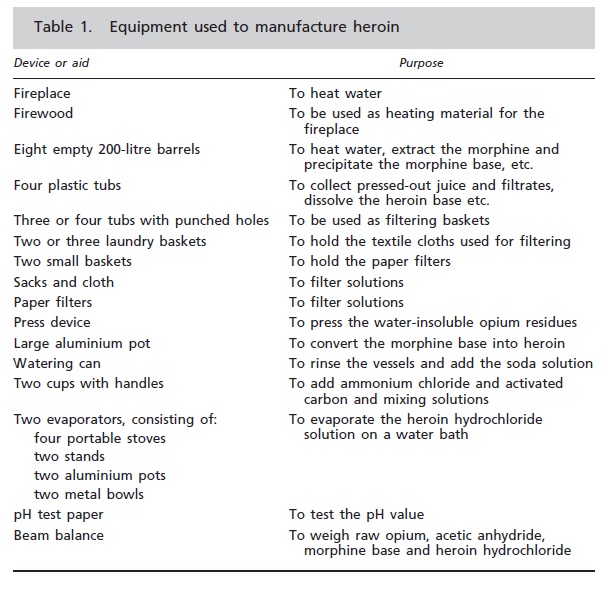 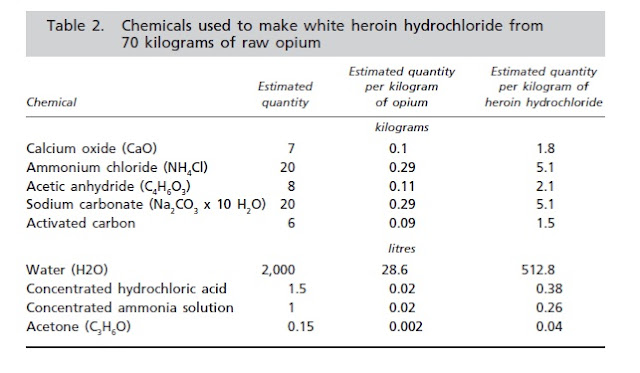 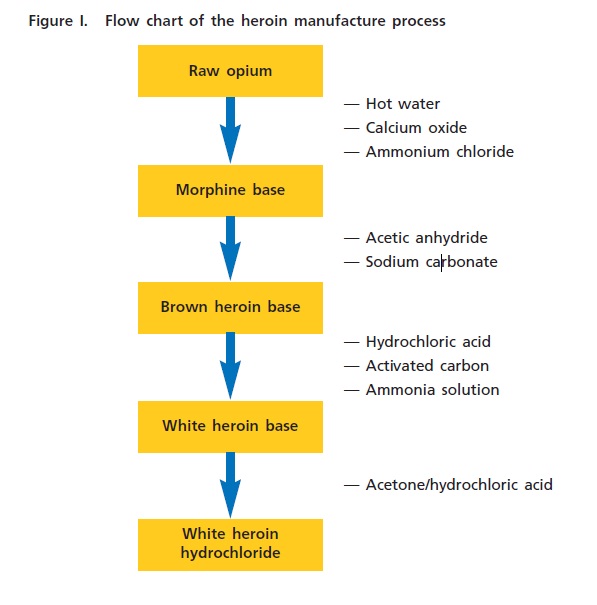 [1] Sodium bicarbonate is better known as baking soda and acetic acid as vinegar.  Remember in grade school the model volcanoes made by mixing vinegar and baking soda to simulate an explosion?  As the basic soium bicarbonate reacts with the acetic acid carbon dioxide gas is released.  Commercial vinegar used in cooking is only between 4-8% acid, the rest being water.  Acetic Anhydride is like two molecules of acetic acid stuck together, but does not have water added.  Water can degrade the acetic anhydride.  Due to its use in the production of heroin, acetic anhydride is "watched" by the DEA.

Many of the images and information in this post were taken from the following document:

Documentation of a heroin manufacturing process in Afghanistan. U. Zerell, B. Ahrens and P. Gerz. Federal Criminal Police Office, Wiesbaden, Germany [Link]
Posted by MorePheen at 2:56 AM